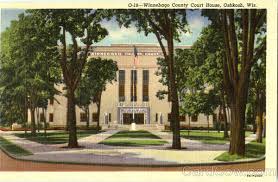 Planning for a new Winnebago County Courthouse began in May 1925. The group recommended the site of the Clark and Kennedy homes on the northwest corner of Jackson and Algoma. After years of debate concerning other possible locations, in December 1935 the board voted 24 – 20 to finally accept the Clark and Kennedy properties for $50,000.

The firm of Granger & Bollenbacher were the architects and Lundoff – Bicknell were chosen as the contractors. The building was designed in the popular Art Deco Style. The first shovel of dirt was turned on January 13, 1937. On July 29, 1937, the cornerstone was laid, and the building was dedicated on July 27, 1938.