In 1978, the intersection of Washington Avenue with State and Jefferson Streets was reworked to create a smoother traffic flow. This plaza was built on the former street right-of-way for State Street. It commemorates William Waters, an Oshkosh architect who designed a large number of the buildings in Oshkosh in the era between the Great Fires of 1874 and 1875 and his death in 1917. The plaza was dedicated June 7, 1980, on the 75th anniversary commemoration of Rotary International by the Oshkosh Rotary Club in conjunction with the John Hicks Trust Fund and the City of Oshkosh. Engraved on the granite slab in the center of the plaza is the following: 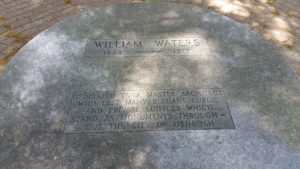 Additional Information on William Waters
William Waters, after attending various schools including 3 semesters of a 4 year course in civil engineering in the state of New York, decided to seek his fortune “west” and came to Oshkosh in 1867. He immediately designed important buildings in the city including the State Normal School and the Brooklyn Firehouse, both in 1869. Arguably, one of his greatest  accomplishments came when he entered and won a contest for state architects to design a Wisconsin building for the 1893 Columbian Exposition in Chicago, which provided him statewide and national recognition. His work in Oshkosh and other cities was varied including courthouses, schools, banks, opera houses, churches, hotels, stores and homes. In total he designed well over 150 structures. Today, we see his work in the Grand Opera House, Oshkosh Public Library, Oshkosh Public Museum, most of our older schools, beautiful churches, downtown buildings, and some of our finest residences. Some say his great success is tied to being in the right place at the right time combined with a natural talent  for design. In his time, Waters was a respected citizen who often shared his good fortune with others. His obituary tells that he helped as a landlord by leaving rents uncollected during hard times and supplying free coal and firewood. William Waters is buried with other members of his family in Riverside Cemetery on Algoma Boulevard in Oshkosh.