This is the earliest William Waters designed residence that is still standing. Waters was born in New York state and began his Oshkosh architectural career in 1867. By the time of his death in 1917, the majority of public and commercial buildings in town were his designs.

William H. Doe had an extensive variety of careers during his 66 years. He was born in New York state in 1818.  Moving to Erie, PA, he served as a Methodist revival preacher and a railroad conductor. In 1854 he came to Oshkosh, where he worked as a butcher. Catching gold fever, he took his family “to Colorado for about five years, and accumulated during the time a small sized fortune from money made in the mining business.” He returned to Oshkosh in 1864, where he entered the lumbering business. The lumber mill burned in 1878, and Doe headed back to Colorado, where he died in 1884. 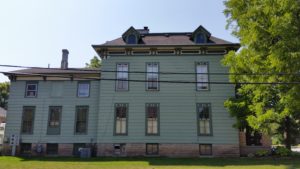 Better known than Doe himself was his one-time daughter in law, Elizabeth McCourt Doe, wife of William’s son Harvey. She was the daughter of a well-known Oshkosh tailor, Peter McCourt. Harvey and Elizabeth had married in Oshkosh but promptly headed west to Colorado. By 1880 they were divorced, and the vivacious young woman still known as “Baby Doe” attracted the attention of silver mining millionaire Horace Tabor. Tabor divorced his wife to marry Baby Doe, which excluded them from society despite their wealth. Their fortune was lost in the 1890s, Horace died in 1899. He told Baby Doe to hold on to the Matchless mine, as it would bring forth riches again. She lived on the mine site, and died there penniless in 1935. Her story was made into an opera, The Ballad of Baby Doe.