This building was meant to be a hall for public performances and gatherings.  However, the building was damaged by two different fires while under construction.  The Methodist Church had also burned, and to have a new home speedily, they bought this building in the fall of 1874, while it was still incomplete. Stained glass windows were installed and the church continued at this location until 1970.  Among the businesses housed on the first floor was Joshua Dalton, grocer, in 1879. In 2015, Skis, a meat market, brought this use full circle.

Below are some historic news accounts of the structure:

As a hall for amusement, concerts and exhibitions, Wagner Opera House or Wagner’s Hall, was one of several opera houses or halls built (fire claimed the majority of them) to satisfy our citizens needs for entertainment especially in the way of concerts and theatre. Still visible today is a stage and raised gallery on the second floor. Our German citizens, it is recorded, loved fine music and theater, and prior to its demise in the great fire of 1874, Wagner Opera House drew such famous names as the Hon. Horace Greeley, famous editor of the New York Tribune, who lectured on the “Women Question,” on September 8th, 1871, and the popular American actor, Frank E. Aiken, who was an all time Oshkosh favorite. Actor, Edwin Clifford and his company were often seen performing at Wagner Opera House throughout the 1870s. A “first class actor and manager” Edwin Clifford was “excelled by few in the west” and was a universal favorite in Oshkosh.” His home since 1869 was Oshkosh, where he was also a member of our local Masonic group. Edwin Clifford and his company would perform week long dramatic performances at Wagner’s Hall such as “Inshavogue,” “Old Phil’s Birthday,” and “The Two Murders.” 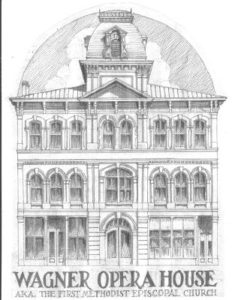 Throughout the 1860’s and 70’s our German citizens were gaining in population and formed the “German Dramatic Society,” which could be seen at Wagner’s Opera House, where plays were done in German and English.

The great soprano diva, Clara Louise Kellogg, a leading American soprano concert artist, was the first U. S. born prima donna, and the first American singer to achieve success in Europe. She performed at the Methodist Church on Tuesday evening December 19th, 1882. Admission was a flat $1.00. The Daily Northwestern, stated that the concert “was probably the finest ever given in the city, and will long be remembered as the great musical event of the season.”
Oshkosh Daily Northwestern, Dec. 20, 1882.

This William Waters, Henry Auler and James Jensen designed Romanesque Revival building is one of the most elaborate buildings in the North Main Street Historic District.  It was constructed as the Wagner Opera House in 1874-1875, a use for which it never served.  The Methodists purchased the building in 1875 and converted the interior into a church, while leaving the exterior as it had been designed.  A major remodeling in 1924-1925 re-styled it as a Neo-Classical Revival building by altering the storefront, creating the tall round-arched windows on the south façade (facing North Main Street) and removing the original bracketed cornice and tower with Mansard roof.  Many of the original Italianate details have been retained including the brick pilasters, limestone belt courses and round and segmental-arched windows with brick hood moldings and pronounced keystones.   The building is a contributing structure in the heart of Oshkosh’s North Main Street Historic District and was listed on the Wisconsin State Register of Historic Places in 1994 and the National Register of Historic Places in 1995. 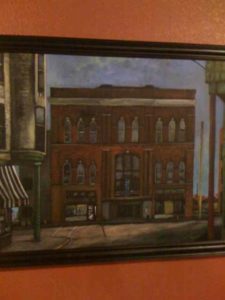