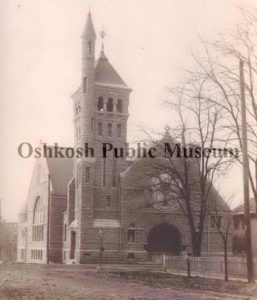 Trinity Episcopal Church, home of a congregation founded in 1850,  is located on the corner of Algoma Boulevard and Division Street.  The structure of the church was designed by Oshkosh architect William Waters.  The Episcopal Parish began building this new church in 1887 after raising $400 and a committee was appointed to draw up plans.  Additional moneys were raised and Mr. Waters was paid $750 for his plans.  The church was built with donations and gifts.  One of the most striking features of the building is the round window above the main entrance.  The window is a Tiffany stained glass portraying the Angel of Prayer, which was given to the church in 1892 by local attorney Charles Barber and his daughters in memory of his late wife Sarah Curwen (Jenkins) Barber.  The semicircular stained glass window on the east side of the building provides balance and continuity and was donated by the children of Emil and Sophie Steiger.  Several chimes were gifted by Louise Webster (forged from a larger bell by the Universal Foundry in Oshkosh), to complete a set of eleven chimes in 1917.  The church has been characterized as “an excellent example of the vernacular Richardson Romanesque Style,” which was very popular in Oshkosh in the late nineteenth century.  The cornerstone was laid on July 3, 1887. The cornerstone of the old church, which was built in 1856, was opened and its contents transferred to the new cornerstone along with new additions including a list of the state, city and judicial officials, the names of officers of the church, journals of the Twelfth and Thirteenth Councils of the Diocese of Fond du Lac and copies of the Daily Northwestern and the Oshkosh Morning Times.  The total cost of the Trinity Episcopal Church, including furnishings, was $38,000.  The first service, a Holy Communion, was held on December 25, 1889 but the church was not officially consecrated until May 28, 1893 by Bishop Grafton.  The structure was placed on the National Register of Historic Places in 1974 and included on the Wisconsin State Register in 1989.