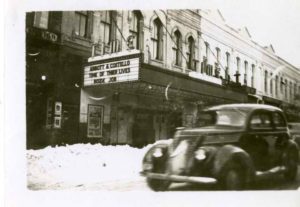 The Time theater open its doors for the first time on Saturday, July 1, 1939. It closed for five months in 1948-49 for remodeling and re-opened on Friday, March 4, 1949. The Time theater provided entertainment until it finally closed its doors on October 27, 1991. In 2004, a local theater group acquired and transformed the historic movie theater into the community theater that still operates in this location today.

The history of this building dates back to the rebuilding after the Great Fire of 1875. Early occupants here included merchants of hardware, tinware, furniture, restaurants, bakery and confectioners. Above tenants were those of a professional nature providing goods and services such as a photographer, violin teacher, and dress makers.

In 1908, the building took its first steps into the entertainment industry. The Superba, a new five-cent theater, opened it’s doors on Saturday, May 2 1908. The venue offered the best American and European moving pictures and illustrated songs. Musical accompany was provided by boy baritone Percival Chase and pianist Asa Clark. The theater was promoted to be well ventilated with fans to keep the place comfortable and cool at all times. The walls were adorned with handsome oil paintings. Three years later, the theater changed hands and became the Rex on August 3, 1911. During this time, the Rex underwent some improvements by installing “The Bartola” designed and manufactured by Oshkosh’s Dan H. Barton. Films would be shown on the new “Powers Cameragraph”, a motor driven machine and the former canvas screen was replaced by a new one of the aluminum variety which made viewing more pleasing to the eye. 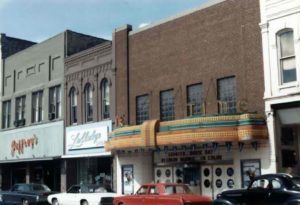 For the next 28 years, the Rex would face a rocky road of changes in proprietors and management, closing and reopening several times. On July 6, 1914, the Rex Theater was purchased by a group known as the New Peoples Theater Company. Certificates of stock for the New Peoples Theater were issued and sold to help finance the project, making the theater “locally owned”. The theater was closed for a few months while extensive repairs and remodeling were made. It re-opened on September 3, 1914. A stage was added to accommodate vaudeville acts along with motion pictures. But its success was short lived.

On August 4, 1915, a public notice was posted announcing the New Peoples Theater would be sold at auction. In September, the theater was acquired and placed under new management, taking on the former name of The Rex Theater once again. It remained under this name until 1917 when it was sold and became The Palace theater. The price of admission at this theater was now 10 cents. A one-cent war tax was added by an act of Congress to support the war effort. This tax, along with well publicized union labor issues with the International Alliance of Theatrical Stage Employees (local union no. 167), created attendance issues at this and the other surrounding theaters. The Palace was operated locally until 1919 when it was acquired by a company of Appleton and Milwaukee interests.

Once again re-named The Rex, the theater underwent some major remodeling. The stage was removed allowing the seating capacity to be increased to 500 seats and set far enough apart for comfort and wide aisles. The interior was re-decorated, a gold fiber curtain was installed, and the whole experience was enhanced with an adequate illumination system.  The “New” Rex was opened on Saturday, April 12, 1919, with an orchestra employed and “continuous shows from 2 o’clock until 11 o’clock that evening without even stopping at the supper hour”. The price of admission was now 20 cents for adults and 10 cents for children.

In 1920, the Hudris Film Company conducted a “talent search” of Oshkosh men, women and children to make a film titled “A Romance of Oshkosh”. No professional actors were used. The film was shown at the Rex theater on August 23, 1920, as part of a double feature. Scenes were shot in various locations around the city including Menominee Park, in front of the Rex theater, The Daily Northwestern office, Trinity Church, Thompson’s Oil Station, the Paine Lumber Company and others. Plays with live actors performed at the Rex during this time. In November 1920 a play titled “The Forbidden Thing” was performed, written by Oshkosh’s own Miss Mary Mears. The event also featured the Pathe News and “The Rex Orchestra rendered a special and appropriate program of music.”

By 1930 the depression was taking its toll and the Rex closed its doors for the third time. It remained closed until Easter Sunday, April 16, 1933. This time, the venue would be second run pictures with occasional first-showing of features. This strategy was not widely accepted by the general public so several months later theater management announced plans to run only “first-run” pictures from Hollywood. But as history tells us, this move would not be sustainable and the theater once again closed in 1937, only to reopen once more on September 15, 1938, in what would be it’s final run. On June 19, 1939, the Rex showed its final double feature. The theater would re-open July 1, 1939, as the Time theater.