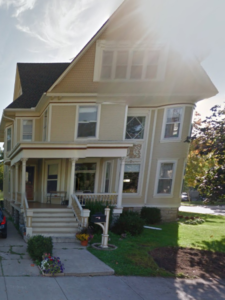 Thomas Rowland Morgan was born in Wales June 28, 1856, and came to the Oshkosh Welsh Settlement with his parents, Thomas and Jane, who farmed.

By 1879, Thomas R. Morgan was working as a bookkeeper for the Foster & Jones lumber company, and residing in a boarding house on Church Street. He later worked for Morgan Brothers lumber, and joined his cousins Albert T. Morgan and J. Earl Morgan in running the Morgan Company after the retirement of his uncles John R. and Richard T. Morgan. At the time of his death, Thomas R. and J. Earl Morgan owned the company, with J. Earl Morgan handling the correspondence and Thomas R. Morgan managing the local factory and employees. He was active in community and civic life, serving as alderman at the time of his death.

Thomas R. Morgan was murdered on August 18, 1903, by a disgruntled Morgan Company employee, Fred Hampel, who was drunk on the job at the time and expected to be chastised for it. Hampel then committed suicide, leaving a destitute wife and children.

Thomas was married in December 1881 to Lydia E. “Lillie” Jones, born 1858 to Morris and Lydia Jones. She continued to live at 32 Franklin until shortly before her death in 1940. She provided the funding for Morgan Memorial Library which opened in 1927 at Carroll College, now Carroll University, Waukesha WI. Her other charitable interest included YMCA Camp Manitowish and the First Presbyterian Church.

Morgan Genealogy by U. Morgan Davies. 1946