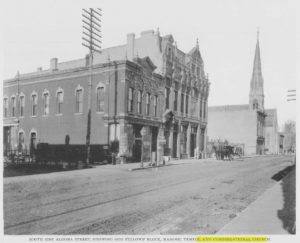 This building was designed by William Waters after the fire of April 1875 for Helen Richards Bailey who then rented the first floor facing Algoma as a store.  The first occupants of the store were Snell and Bliss, grocers.  Mrs Bailey used one of the Market Street entrances for her own dressmaking business.  In 1881 she moved to the Frankfort South Dakota area, and from that time on appears with the surname Maine, the name of her first husband. Her obituary states: “Mrs. Maine conducted a dressmaking and millinery business for a term of years and erected the building now occupied as a drug store at the corner of Algoma and Division streets, which she sold to Charles Nevitt, the present owner. She went to Dakota in 1881 and took up government land which she improved . . .  but delicate health in the severe climate finally compelled a change and she sold out and returned to Wisconsin.”  By 1895 she was living with her son Andrew Maine.  She is listed in his household in the 1905 Wisconsin State census, in Appleton.  She died at his home there in 1907.