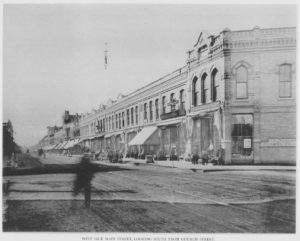 Rudd and Holden was formed by “Carriage and Sleigh manufacturers” George Rudd and Edward Holden. The building on Main Street was the front office, with the actual factory across the alley to the west. Shortly after they had completed a new building, the area was burned in the fire of July 1874. The building had not yet been insured. The present building was constructed to replace it, but the firm never fully recovered from the financial pressures created and was dissolved in June 1880. Rudd went to work for another manufacturer of carriages, Oshkosh Carriage Works, replacing Thomas Neville who resigned “to move to Chicago.” Instead, Neville became Holden’s partner! By 1883, Neville is listed in the City Directory as making carriages at the factory location. Meanwhile, the storefront had become a grocery store for J. N. Hoaglin, “dealer in Choice Family Groceries, Provisions, Crockery, Glassware, etc.” It remained a grocery store until after World War II.