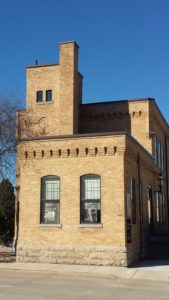 In 1890, Pabst Brewing Company moved its northern Wisconsin distribution branch from Fond du Lac to Oshkosh. Encouraged by the early success of the operation, the Milwaukee brewery initiated a series of land purchases in Oshkosh for the purpose of constructing a new bottling house and distribution center to service the region. By 1896, Pabst had acquired the land it needed.

Pabst commissioned Oshkosh architect William Waters to design a building that would be keeping with the Victorian Gothic style of its Milwaukee brewery. Construction by Oshkosh contractor Carl Schneider began in the spring of 1896. The structure was completed that summer at a cost of approximately $8,000.

Though the building resembled a small brewery, beer was not produced at this location. Instead, Pabst shipped wooden kegs full of beer from its Milwaukee brewery to this facility. Here the beer would be bottled for distribution in Oshkosh and surrounding areas under the supervision of the brewery’s local agent, Lawrence Thenee.

The Pabst branch in Oshkosh remained active until 1920 and the beginning of Prohibition. The Milwaukee brewery divested itself of the property in 1925.