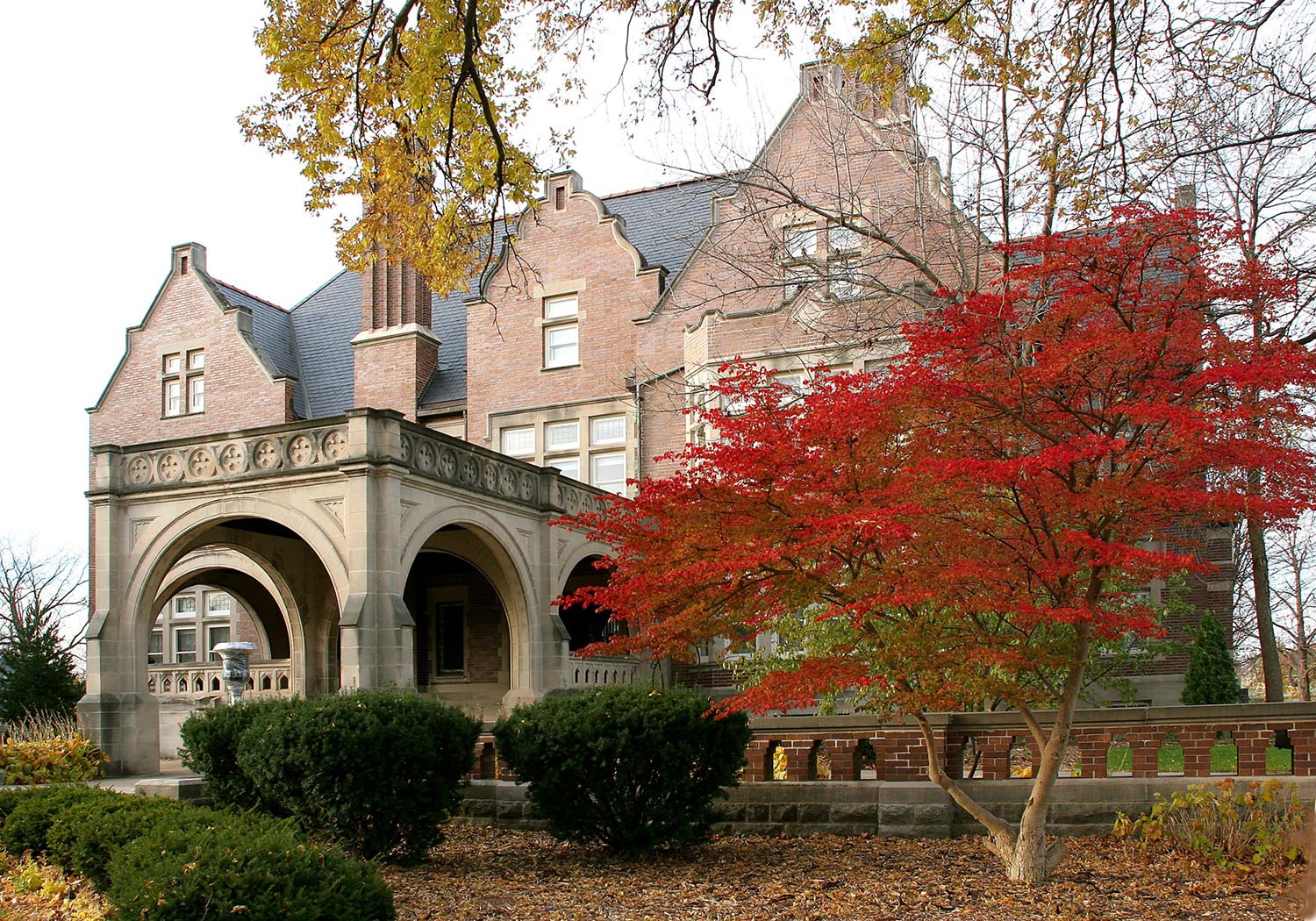 The cornerstone of the Oshkosh Public Museum is the historic home of Edgar P. and Mary Jewell Sawyer. Designed by Oshkosh architect William Waters in a style reported as “Gothic and Old English,” the home was built in 1908 by C.R. Meyer Co. of Oshkosh. The prestigious Tiffany Studios of New York was contracted to design and furnish the interiors of the home. One of the most recognizable and beautiful Tiffany features is the iridescent stained glass windows on the landing of the grand staircase.

The Sawyer home is a wonderful example of Edwardian elegance. Built of Indiana brown brick and Bedford limestone, the grand fortress encompassed approximately 17,600 square feet and incorporated all the modern conveniences of the time – horsehair insulation, two telephone lines, electrical and gas services, electric elevator and a coal-fired steam heating system. The Sawyer’s estate also included a carriage house on the southwest side of the grounds, with three box stalls for horses, a carriage room and garage space for four automobiles.

Edgar Sawyer was a prominent lumber baron and businessman, owning several diverse businesses. Born in 1842 in Crown Point, New York, he moved to Wisconsin with his parents in 1847. When his father, Philetus Sawyer, began his political career in 1857 much of the responsibility for the lumber business was given to Edgar. In business, as in life, Edgar practiced absolute fairness and generosity.

Edgar and Mary Jewell were married in 1864, merging two very prominent families in Oshkosh. They were both 66 years old when they moved into their grand and modern new home in 1909. Sadly, Mary passed away from heart failure the following year. After Mary’s death, Edgar seldom lived in the home, dividing his time at Waldwic, their summer home on Lake Butte des Morts, and a home in Palm Beach, Florida. Edgar Sawyer died there in 1927 at age 84.

The Sawyers were well liked and respected, and they made many philanthropic gifts to the people of Oshkosh without any fanfare. Edgar donated his residence on Algoma Boulevard to the City of Oshkosh in 1922 “free of all restrictions or limitations, except that it be used for the benefit of the public.” The City formally accepted the donation in 1924, and in November of that year the “art museum at the Sawyer Foundation” opened its doors to the public. The name “Oshkosh Public Museum” began being used in early 1925.

Today the Sawyer home is listed on the National Register of Historic Places. Construction of the William Steiger Wing in 1982 irreversibly altered parts of the home, and the interior of the building underwent extensive restoration after the museum fire of 1994. The quality and accuracy of the restoration earned the Oshkosh Public Museum awards from both the Wisconsin Trust for Historic Preservation and the American Association for State and Local History.