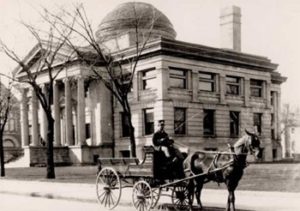 The Oshkosh Public Library was built on the site of the home of Marshall and Abby Harris in 1899-1900. Harris, an Oshkosh lumberman, died in 1890. Abby Harris died in 1895 leaving “the balance of her estate … in trust for a public library to be built and maintained upon the Harris homestead property … provided that within three years of her death the city of Oshkosh … shall give an equal amount for the same purpose.” [Oshkosh Times, June 24, 1895]

Former U.S. Senator Philetus Sawyer eased the City’s burden by donating $25,000 to the project. The city bonded for the remaining $50,000 for construction. In 1899, a contract was signed with Gindele and Co. to build the structure. The building was designed by Oshkosh architect William Waters in the Neoclassical style, with a magnificent entrance.

The exterior of the central building looks much as it did when constructed, with the addition of two wings in 1992. The interior has been modified to facilitate changes in use. The structure is in excellent condition and is significant historically because it is a physical representation of the true progressive nature of Oshkosh’s nineteenth century citizens.

The two lions “guarding” the Washington Street entrance were done by Italian artist Gaetano Trentanove and were presented to the library as a gift from Colonel John Hicks in 1912. They are commonly referred to as Sawyer and Harris, after the names of the donors inscribed on the building behind them.