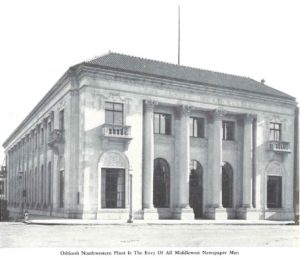 Established in 1861 as a weekly newspaper, and a daily consistently since 1868, the Oshkosh Daily Northwestern has outlasted, and in some cases absorbed, any other newspaper in the city.  After several locations adapted for the purpose, a building was constructed on the corner of State and Otter in 1894.  The need for space for new equipment led to the construction of the Carthage Building to serve as offices in 1912, but by the late 1920s, the need for a new building was obvious.  This building opened September 2, 1930, with the latest in high speed presses and other improvements.

The building is constructed of Bedford stone with classical columns around the front entrance and balconies on the upper floors.  The roof is green tiles.