William Waters and Henry Auler were selected as architects for a new high school in 1914. This was the third structure on this site and was attached and in front of the brick school constructed in 1903. The new building was in the Neoclassical Revival Style featuring stone exterior, large columns, pedimented doorway, and hooded window frames. The construction was started in May of 1915, by C. R. Meyer & Sons and completed in December of 1915. The new school opened in January of 1916 and served the city until the present West High School opened in the fall of 1961. The old school was then remodeled to serve as Oshkosh City Hall, a role it still fulfills.   The earlier brick school was leveled to create a parking lot for City Hall. 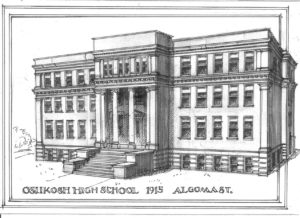