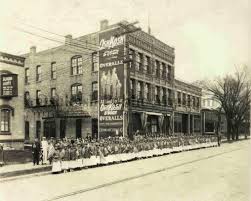 The Grove Manufacturing Co. was organized in July 1895 by Frank E. Grove, J. Howard Jenkins, and James Clark. Jenkins and Clark bought out Grove and the company name was changed to the Oshkosh Clothing and Manufacturing Co. in December 1896; that same year, the plant was organized by the United Garment Workers. The company named their work overalls “J & C” after the owners.

In 1901, the business moved to larger headquarters at 33 Otter St. and William E. Pollack became a partner in the firm. Pollack changed the company name to the Oshkosh Overall Co. and began the brand name OshKosh B’Gosh.

The company was restructured as a public stock company in 1929 under the laws of Delaware to take advantage of that state’s pro-business tax laws and regulations. In 1934, a majority of the stock was owned by Sam Pickard and Earl Wyman. In 1937, the company once again changed its name, this time to OshKosh B’Gosh Inc. The company began using promotional red bandanas in the 1951.

In 1954, the company built a manufacturing plant in Celina, Tennessee and ten years later the company opened a third plant in Columbia, Kentucky. As the company expanded, plants were opened in Liberty and Albany, both in Kentucky; Byrdstown, Jamestown, White House and Gainesboro, Tennessee; and in the country of Honduras. Retail and outlet stores were opened in the 1980s and 1990s.

In 1997, the company announced all men’s overalls would be made outside the United States and closed the Oshkosh manufacturing plant. The Oshkosh distribution center closed in June 2000 as services were consolidated at the White House, Tennessee, plant.

While the building is currently open to the public, there are no public tours available.