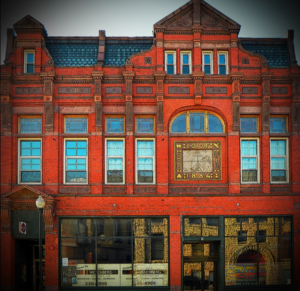 The Odd Fellows Hall at 103-107 Algoma Boulevard was built in 1884 for the International Order of Odd Fellows – Winnebago Lodge (No. 120) used as a meeting hall of the Odd Fellows fraternal organization, which was dedicated to the service of others. The two-and-one-half story structure is an elaborate example of Patterned Masonry Queen Anne design. It was designed by Milwaukee Master Architect Henry C. Koch (1841-1910). The façade is veneered with glazed red brick, divided by projecting brick pilasters and ornamented with red glazed terra cotta panels. A monumental terracotta panel, set off-center at the second story reads: “ I.O.O.F. 1884” and depicts various Odd Fellows symbols. At the top of the building are two shaped parapeted false gables and a mansard roof clad with multicolored slate. This is one of the most distinctive buildings in the North Main Street Historic District and provides interesting contrast to the predominantly Italianate structures in the area. This historic structure was listed on the National Register of Historic Places in 1996.

The Independent Order of Odd Fellows in Oshkosh dates back to 1849.  There were several lodges, including Danish and German speaking groups. The ladies auxiliary is known as Rebekahs; their first Oshkosh lodge was chartered in 1874. Charitable projects have covered a wide range over the years, including a youth camp near Waupaca and a nursing home.

Other groups also met at this hall, including the Ancient Order of United Workmen and Knights of Pythias.

During his 1831 trip to the United States, Alexis de Tocqueville observed that Americans were constantly joining—or founding—associations, for a wide variety of purposes. Many men were members of one or more fraternal associations, a category which in Oshkosh included the Eagles, Elks, Moose, Odd Fellows and Masons. These groups often had a suite of rooms if not a full building in which they held official meetings and ceremonies. The club rooms also served as a place to make business connections and to socialize over cards or billiards.

Winnebago Lodge no. 120, which was chartered in February 1867, signed for the mortgage needed for construction of this building. The building had lodge rooms upstairs, and the first floor was rented to merchants as a source of income. The hall has 24 foot ceilings with ten foot tall windows on one side. Stained glass windows were added on the street side in 1890. As membership dropped, the ability of these groups to maintain their elegant buildings became limited.

The first floor of this building was re-worked in the early 1990s to house a restaurant. In 1996 the Landmarks Commission gave an Acanthus award to Robert Albright for his renovation and reuse of first floor as The Globe, a restaurant. Manila now occupies this location. The hall above, known as the Algoma Club, can be rented for special occasions.