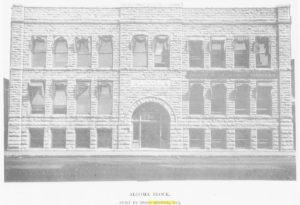 This unusually shaped building was designed by William Waters for attorney Moses Hooper and his firm. It is significant as a fine example of Richardsonian Romanesque, here applied to an office building. The building consists of cut limestone, rough faced. A central pavilion projects slightly and contains a roman arch entrance, with segmentally arched windows above. Use of stone in the commercial area was normally limited to details rather than the main building material.

Moses Hooper was born in Maine in 1835. He was educated at Amherst and Bowdoin Colleges and Yale Law School. One year after his admission to the bar in Maine, he came to Wisconsin. After six unsuccessful years in Neenah, Hooper moved to Oshkosh, as being in the county seat was more convenient for legal matters. But his time in Neenah served him well in the long run, as he was hired to serve as attorney for a new corporation, Kimberly Clark and Company, where he remained for nearly 60 years.

Hooper’s area of expertise was riparian rights, the right to the waterpower along the river. He was such an authority on this subject that he appeared before the U.S. Supreme Court repeatedly, and was often quoted by later attorneys on the topic. He was considered to be the oldest practicing attorney in the United States at the time of his death in 1932.