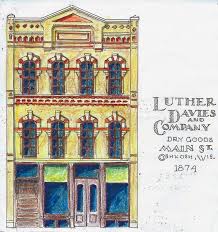 This structure was probably built shortly after the fire of July 14, 1874, certainly by 1879, probably by Richard Barker, a contractor who owned the property according to maps dated 1877 and 1886.

Luther Davies moved to Oshkosh and opened a dry goods store here in April 1892.  He continued in business at this location until around 1923.  The building has housed a shoe store ever since, as Britton’s Walk-Over Shoes since the mid-1950s.