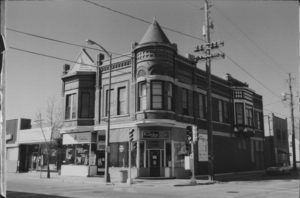 This building is notable as holding the offices of women physicians, Dr. Adeline Riddle, who came to Oshkosh in 1894, and her sister, Dr. Julia Riddle, who moved to Oshkosh from Appleton in 1897.

The sisters had their office practice and residence in the building for several years. Known as practicing homeopathic medicine, they had to overcome strong prejudices against women practitioners. They were editors of the Journal of Preventive Medicine and were said to be the first to have an X-ray machine and the second and third doctors in town to own a car, a Maxwell. In 1912 they toured Wisconsin in their car for the suffrage movement election that year. Dr. Julia was the only woman appointed as surgeon for the Wisconsin Central Railroad Company.

The Daily Northwestern gives an interesting account of how an early X-ray machine in the offices of the Riddle Sisters was used to confirm that the dog of local attorney Edward Hooper had indeed swallowed a silver dollar.

Hooper had expressed concerns about Bud, the dog, who he had seen playing with the silver dollar the week before the appointment, with the doctors to use their X-ray machine. Mr. Hooper valued the dog very highly and he was worried about whether the coin remained in the stomach or whether surgery would be necessary to save his life.

So, on this Monday evening in November at 8 pm the dog was placed on an insulated platform and remained in one position for seventeen minutes with a photographic plate strapped to him and the X-ray tube over him while the X-ray photograph was taken. The only problem occurred when the dog wagged his tail and one of the wires of the machine came in contact with the dog giving him a slight shock that caused him to give a yelp of pain. Otherwise the dog was very gentle and obedient and came out of the experiment uninjured and ready for play.

Following the dog’s time under the X-ray, the witnesses to the experiment (including the owner of the dog, and an assistant from his law office, the physicians, and a Northwestern reporter), took turns looking at their own hands and feet to examine the bones of their own bodies, and watching the heart beat, and doing other experiments.

In the end, Mr. Hooper was undecided as to whether or not to have his animal operated upon.