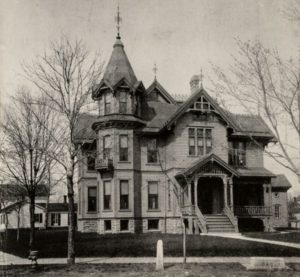 The residence at 234 (116) Church Street is that of lumberman John Rogers and Eleanor Hughes Morgan.Today it is the headquarters of the Winnebago County Historical & Archaeological Society. Built in 1884, in architecture the building is a fine Queen Anne which for a considerable time had been popular in the east. By the 1880s this style of architecture in the west had become the “popular rage.”

The 1880s brought forth financial success to many since the devastating fire of 1875. “A great deal had been added to the city’s appearance and wealth” and much was being done throughout the city in the way of “substantial improvements” as the completion of the Water Works, extended sewerage system and street improvements. At the time this house was built, building was being done amongst the rich and poor in all parts of the city with no sign of stopping. This elegant home was designed and built by the prominent architects and contractors of the day, Bell & Cole, and had an estimated cost of $12,000.

The crowning top of the octagon tower that once added greatly to the beauty of the house was removed by the mid 1980s. The home was built with “every modern improvement that could be wished for.” The basement had a stone floor, and was plastered with completely equipped laundry rooms. Bath rooms and wash bowls were supplied with hot and cold water and steam was used for heating purposes; gas fixtures in all the rooms; electric bells found in convenient places and two pairs of back stairs.

The floors in the first story, vestibule, parlor, sitting room, library and dining room are hardwood furnished with handsome fancy hardwood borders of birdseye maple, cherry, birch, ash. The stairway, a fine piece of work, is of oak and mahogany, while the dining room and hallway are heavily wainscoted with panelled wainscoting. The elegant sideboard in the dining room along with two of the seven mantles, like the rest of the of the woodwork in the home, was manufactured by Bell & Cole in their Oshkosh factory.