The Grand Opera House was built through the subscription of stock in 1882-1883 to provide the community with a first-class theater for artists and local productions.  The building was extremely modern at its construction and was considered one of the best theaters in the Midwest, drawing entertainers with national reputations. The opening play was “Bohemian Girl” with Miss Abbie Carrington playing the lead. The building, designed by William Waters, is of Romanesque Revival architectural style. Construction, exclusive of architects fees and frescoing, was by Bell and Cole for a cost of $19,344. Oshkosh artist JF Waldo did the frescoes, Jim Wagner did the interior painting and Bell and Cole did the woodwork.  The Grand Opera House was placed on the National Register of Historic Places on 1/21/1974 and on the State Register on 1/1/1989.

Among the well-know performers who have appeared here over the years are John Philip Sousa and his band, the Marx Brothers and George M. Cohan.

Thespians, concert singers, traveling preachers, magicians, minstrel shows and the circus began traveling to western outposts like Oshkosh as early as 1851. Oshkosh had always procured a hall or house for entertainment purposes likes Marks Hall, Washington, McCourts, Wagner, Fraker and Turner Hall, where our citizens could hold their balls, fairs, festivals, dancing schools and sociables. These were mostly consumed by five significant fires between the years 1859-75. By the time the Grand Opera House was built in 1883, a mystic developed about the city of “Oshkosh” amongst the thespian. Popular it was in story and joked about on stage by comedians and humorist alike. The Grand Opera House was the city’s crowning achievement in 1883. Metropolitan in every aspect this began an epoch of entertainment where standing room was at a premium for many attractions. Theaters provided a well-rounded fair of attractions during the theater season with plays taking the lead where the best actors in legitimate theater appeared on the Oshkosh stage like Edwin Booth, Emma Abbott, the Barrymores, Fay Templeton, Joseph Jefferson, Lotta Crabtree, John Drew, Otis Skinner, Julia Marlowe, Helena Modjeska, Maude Adams, Anna Held, Mrs. Fiske and Lillian Russell to name a few. Comedic stars ranged from John Dillon, Sol Smith Russell, Nat C. Goodwin, Eddie Foy, Robson and Crane, to the Four Marx Brothers in 1912. Grand and lavish stage productions were highly attended like “Lights o’ London,” in 1883, the fairy opera “Naiad Queen,” in 1889, the aquatic spectacle “A Dark Secret,” in 1891, and George M. Cohan’s, “Little Johnny Jones” in 1909. Also that same year was the grand spectacle, “Ben Hur.” Staged on a scale of unparalleled splendor the Daily Northwestern carried extensive coverage of the event in March of 1909. Memorable were the “two special trains of twelve cars, carrying 150 people, thirteen horses, a camel, eighty forty-four foot drop curtains” (*The Daily Northwestern, March 29, 1909) and four live horses racing on two treadmills on the Oshkosh stage. Full of mystery and intrigue were the numerous minstrel shows like J.H. Haverly’s “Mastodon Minstrels” and George H. Adams’ “Humpty Dumpty Troupe” and “All Star Specialty Company.” Magicians included The Great Kellar in 1890, Herrmann the Great in 1895 and Fredrik the Great in 1916. Musical entertainments were highly favored, like soprano opera divas, Clara Louise Kellogg in 1883, Emma Juch in 1888 and John Philip Sousa and his United States Marine Band, who dazzled Oshkosh audiences in 1892 and 1902. Elocutionist, literary entertainments, burlesque, and local amateur groups were all regular theater fair. Due largely to manager “Honest” John William, the Grand Opera House in Oshkosh became known as the “best one night stand” in the country by the 1890s. As the latter 1890s approached moving pictures and vaudeville began to appear on its stage. 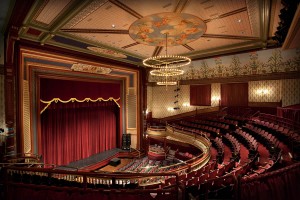 The Grand Opera House’s popularity thrived throughout the vaudeville and motion picture years. By the 1950s the theater was used chiefly for showing movies and the Oshkosh Community Players would present three plays a season. The 1970s brought its decline with the theater turning into a X-rated theater. Through a movement that started in 1965 the Grand Opera House would undergo a massive and expensive renovation in the early 1980s with a gala grand opening on September 27, 1986, replicating the theater’s first performance of 1883, “Bohemian Girl.”