This building was originally the location of the F.X. Haben & Co. Grocery and was reconstructed by Francis X. Haben in 1874, following the loss of his original building on this site that burned in the great fire that engulfed Oshkosh’s Main Street north of Algoma.  Francis Haben was not only a grocer but was Oshkosh City Treasurer and a prominent member of St. Peter’s Church. The two-story Italianate style brick commercial vernacular building features three round arched windows on the second floor separated by pilasters and brick hood molds as well as corbel  tables and inset panels marking the cornice.  The building is part of the National and State of Wisconsin Register of Historic Places as a contributing structure within the North Main Street Historic District-listing date March 7, 1996. db 5.7 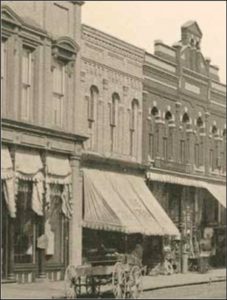