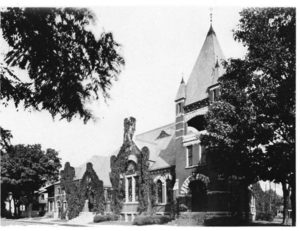 On October 14, 1872 the First Presbyterian Church and Society of Oshkosh, Wisconsin, was incorporated.  In October, the people voted to build a chapel on Jefferson Street.  On December 17, services of worship were held in the finished chapel, which had cost $982.99. On September 4, 1875  the Methodist Church building and parsonage on Church & Division Streets were exchanged for $6,000 for the chapel and lot on Jefferson Street. On August 5, 1895 a new building was dedicated at the same location. This structure was built in the Richardsonian Romanesque style and features the mixed use of stone and brick with large arches. A new addition west of the Sanctuary was constructed in 1906. This was designed by William Waters and was constructed by the firm of J. T. Raycraft and C. R. Meyer. Two stories high, it served as a Sunday School assembly room and individual classrooms.  Dedication took place December 2, 1906.