Today, the First National Bank at 404 North Main Street is one of the most monumental structures on Main Street and is an exceptionally intact post-World War I example of the Neoclassical Revival architectural style. Designed by the Hoggson Brothers, a firm with offices in New York and Chicago, the bank was built in 1926-1927. It is of steel, reinforced concrete and structural clay tile construction with smooth coursed ashlar veneer.  A six-story tower rises from the center of the two-story main block.  The main block is articulated by a series of two-story pilasters, a frieze enriched with disks and dentils and a cornice, surmounted by a paneled stone parapet.  The entrance is at the base of the tower and is comprised of double-doors (not original) in a richly decorated surround.  There is a hood with broken pediment above the doors.  The whole is set within a round-arched opening flanked on either side by a tall round-arched window.  As with the two-story portion of the building, the tower contains a decorative panel beneath each eighth story window.  Above the windows is a frieze with medallions, surmounted by dentils, a cornice and a paneled parapet.  This building is a contributing structure within the North Main Street Historic District and listed on the National Register of Historic Places in 1996. 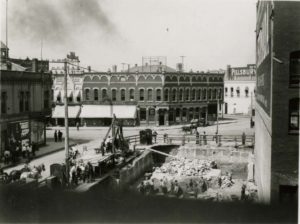