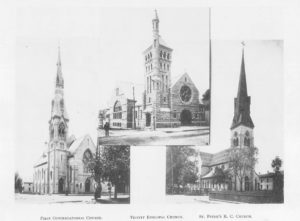 The First Congregational Church was organized on July 11, 1849. The first serves was held on the second floor of the Courthouse and overseen by Rub. H. Freeman. In 1851 the building of the first church for the congregation on Main Street near Church Avenue. The building had two wings added in 1853, bringing the seating capacity to 500. This small building was used until November 5, 1858.  In 1858 the congregation was meeting in the basement of their new church that was under construction at the corner of Algoma &  Bond St. (now Brown). The church was completed on June 1, 1867.  On the afternoon of July 10th, 1872, the church was razed by fire.  A new church was built on the same site and dedicated on October 29, 1875. The Reverend Edward H. Smith preached his first sermon in the church in May of 1886, and served until he retired in 1913. The current church was finished and dedicated in January of  1912. The old church became the parish’s fellowship hall, which served the people for many years until it was razed and replaced by a new hall.