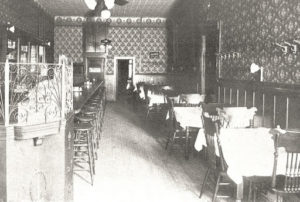 The construction of the Dichmann Block building was commissioned by William Dichmann, a grocer and future Oshkosh Mayor, in 1884. It was designed by famous local architect William Waters and constructed by local builder James Ruby, at a cost of $5,000. For the last 130 years, the two-story red brick commercial vernacular building, designed with dominant stone string courses and a band of terra cotta ornament as well as corbelling topping the façade, has graced North Main Street and the central business district of the City of Oshkosh.

Throughout its life the building has been primarily used as a beer hall/tavern but has also included grocers, restaurants, and retail establishments. In 1920 prohibition was instituted (1920-1933) and the building was officially occupied by a soft drink parlor but may have been what is commonly known as a “speakeasy” as the owner was arrested in 1927 on the charge of “selling intoxicating beverages”. In March 1996 the Dichmann Block building had the honor of becoming part of the National and State of Wisconsin Register of Historic Places as a contributing structure within Oshkosh’s North Main Street Historic District.

For additional history of the commercial establishments in the building through the years. 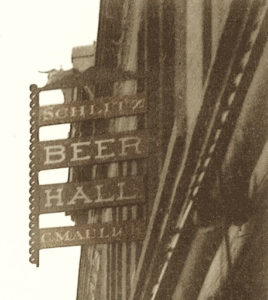