What Used to be Grand - Renee Ruman A brick falls high from the build hitting the ground with an empty clunk. turning over once, twice, three times until it shatters like glass onto the ground with large pieces that lay to rest on the sidewalk. Several other bricks were hanging by their fingertips and looked as if someone were to breathe gravity would assist with the rest. The building of which the bricks were from looked as if it had once stood proudly for hundreds of years but was now disintegrating before the eyes of the town. The building radiated something that felt strange. To passers-by, they would hear a soft oh-oo-oor of pigeons roosting in the walls where the building had started sheading it layers of brick and mortar. There were distant memories of what the building used to look like. There was a staircase leading up to the main doors which both ceased to exist. The staircase was filled in with bricks. Above the staircase, there were large windows that welcomed and enlightened the internal parts of the building. That too was bricked shut; unwelcoming any of its visitors. The building appeared as if someone took plaster and frosted the whole building with it. The inside of the building was dim and engulfed the objects into a black oblivion. The floors were almost all rotted and unstable if anyone were to walk on them. The building was decrepit due to years of abuse. This was no ordinary building due to its history… it was an opera house. This building was a first class opera house built less than 100 years ago at the time. This was The Grand Opera House. This opera house was once the center of entertainment hosting some of the most identifiable names in history, the Marx Brothers, John Philip Sousa, Hellen Keller, and Susan B Anthony… a building that had so much potential was left to crumble… and soon to be forgotten… A newspaper fluttered as gracefully as a butterfly across the street. The wind howled and the newspaper was plastered on the side of a building reading, “…must repair a deteriorated wall at the north end of the building within 60 days, or the building will be subject to a city order to demolish it.” The Grand Opera House had been named a safety risk to the public. Such a magnificent building that brought visitors from all over the country to see live shows was now just an old theater endangering anyone who entered or went near it. The Grand Opera House continued to crumble like an old cookie and was considered unrestorable. Very little of the original of the Opera House would remain if a restoration was able to take place. The people of Oshkosh made a decision that would change the fate of The Grand Opera House. The citizens created a non-profit group named “The Grand Oshkosh”. These volunteers started a campaign that could give The Grand Opera House another life. Live entertainment could be reborn. The campaign was to “Save the Grand”. 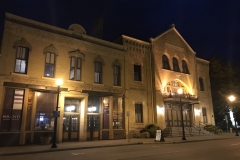