Helping the People of the Community- Brooke Rahmlow

In the past of the Howard, there have been many events and famous people who have performed there. The venue was this great big ballroom that a whisper could travel to the other side of the room within five seconds. Fraternal Order of Eagles original bar was In the corner, with a great big stage across the room. With the storage doors underneath the stage to project the sound like a microphone.
They host events from weddings to club meetings. The Fraternal Order of Eagles was a club was that met to discuss how to help the people of the Community. All kinds of people have performed there like Johnny Cash on October 31, 1957 which was Only a dollar fifty for admission. Also, Fleetwood Mac performed.
Many different Events were held there. The events were to either raise money or to have a fundraiser, to help the people of the community.

When the Eagles club originally opened In 1927, at the time it was a male-only Eagles club. Now after the rebuild in 2017, The style was a revival of English medieval styles. The Howard is kept to the original design as possible most of the fixtures are original. The doors facing the streets were handmade to look original from the late 1920s. The stained glass windows facing Washington ave are completely original. All furniture was reupholstered to look original. They sanded down the tables and chairs and then stained.
The children of Senator Ron Johnson, Carey Sharpe, and Jenna Golem Bought The Howard and named it after their late grandfather Howard Curler. 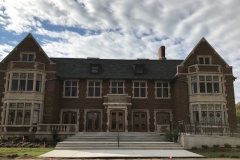 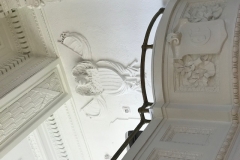