Originally a small-town manufacturer of adult work clothing, Oshkosh B’gosh has become best known for its children’s clothing, especially bibbed overalls. The original children’s overalls, dating from the early twentieth century, were intended to let parents dress their children as their fathers. In the early 1900s overalls skyrocketed in sales in adult men who worked on railroads and even in lumber companies at the time. In the early ’70s and ’80s B’gosh sold over 160 million dollars worth of clothing. The original factory that was the start of Oshkosh B’gosh was moved out of as it needed to expand their business. Competing companies such as Carter’s, a popular children’s brand competing with B’gosh in sales for children’s clothing moved in to take B’goshs place. Eventually, B’gosh grew out of making overalls as the product sales were down for adult clothing. As time began to catch up with the owners and sales were down, Oshkosh B’gosh sold the business to Carter’s. B’goshs sales turned into almost all of their business straying away from selling very few items in adult clothing. Carter’s transformed Oshkosh B’gosh into a very popular children’s brand. As of now, B’gosh has fallen down after their big jump in stocks in the 1900s. Children’s clothes are flying off the shelves across the nation. Parents want to see their kids in B’gosh clothing as it represents their fathers and grandparents. Overall Oshkosh B’gosh is a huge part in not only children’s clothing but in being more than just a business. 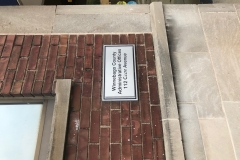