Can a Rich Man Be Selfless? - Makylar Larson He was a wealthy man, part of the Mississippi Railroad, owner of a big property, involved in partnerships in a grain mill and several lumber mills in Oshkosh. He was also on the board of several Oshkosh banks. He was a selfless man that would give his shirt right off his back. Orville Beach is a man that operates in a way that surprises many people including me. Orville Beach once lived in New York and he then moved to Oshkosh and became a very successful businessman. Orville Beach is a very unique and selfless man because he chooses to donate money to the city instead of other ways he can use it for himself and his family. The city then makes a training school that was connected to the only high school in Oshkosh at the time. The city tore down his house after he died to make a school, this is why Orville Beach is very unique, most people would keep it to their family or make a huge gravestone or other things rich people would do, but not Orville Beach. He donated his land and money to this building because he wanted people to learn unique skills, and a selfless person like Orville Beach would give just enough to make a huge difference. Orville Beach made it possible for many kids to learn new skills such as sewing, cooking, woodworking and much more opportunities that Orville Beach provided everyone. 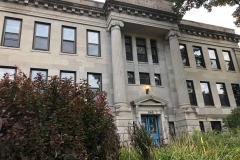