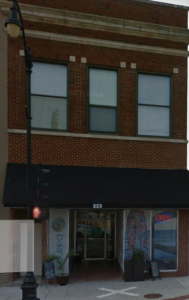 The Commercial Bank of Oshkosh is located on the southwest corner of Main Street and High Avenue. The Commercial Bank of Oshkosh was incorporated in 1860. After the Great Fire of 1875, it was located in the Jackson building on the east side of Main, until the construction of this building in 1882. The entrance originally faced the corner. A later facade was put on the Main Street side in the early 1900s.

Thereafter, the building built in 1881-82 for the Commercial Bank has housed retail businesses. The longest running of these was Mangel’s, a ladies wear store, which occupied the building for over 50 years. The change in the entrance (from corner to facing Main with show windows) dates from 1941, during the Mangel’s tenure.