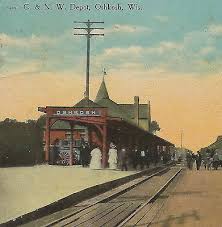 The Chicago & Northwestern depot is situated along Broad street between Washington and Merritt.  The location actually required that part of Broad Street to be made less broad, but in return the C & NW pledged to build a sideway on the east side of Broad St. and contribute to the care of the street.  The city agreed, and the depot was constructed in 1884, with a large article in the Oshkosh Weekly Northwestern January 8, 1885, heralding its completion.

The depot consisted on three buildings connected by a large roofed platform.   The main building included the passenger waiting rooms, restrooms and ticket agent’s office.   The smaller buildings were used for baggage and for coal storage. All were of Duck Creek limestone base, with red brick for the upper portion of the walls, with slate roof.

This depot  served as the point of departure for Oshkosh units headed for service in World War I.  Upon their arrival back here, the troops marched over to Main street and beneath an elegant Victory Arch to the cheers of crowds of citizens.

Passenger service to Milwaukee and Chicago continued until 1971. jd 6.10