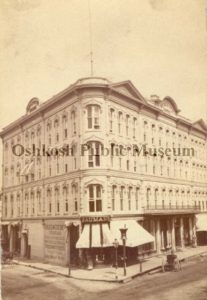 Designed by William Waters as a four-story building, the Beckwith House was erected in 1875 after the Great Fire to replace an earlier hotel on the same site, and it quickly became Oshkosh’s premier business hotel. As with many commercial buildings, the first floor was devoted to retail. Bauman’s Drug Store was the main tenant in the previous building from 1870 through 1929.

The hotel entrance was on Main Street, where the building had 130 feet of frontage.  Customers took a wide stairway to the second floor office to register for one of the seventy-one rooms on the third and fourth floors. The remainder of the second floor was filled with a dining room, parlors, and sample rooms, which were used by traveling salesmen to display their goods to local businesses and individuals.

The upper floors were destroyed by fire in December 1880. Three people died, including two employees of the hotel. The owner, Samuel Beckwith, was unable to finance rebuilding the entire structure but did restore the first two floors. It was believed that rebuilding with only two stories was necessary to avoid such a tragedy again in the future. 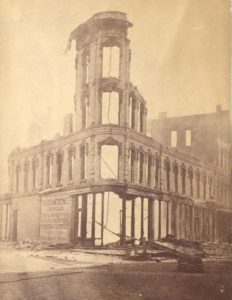